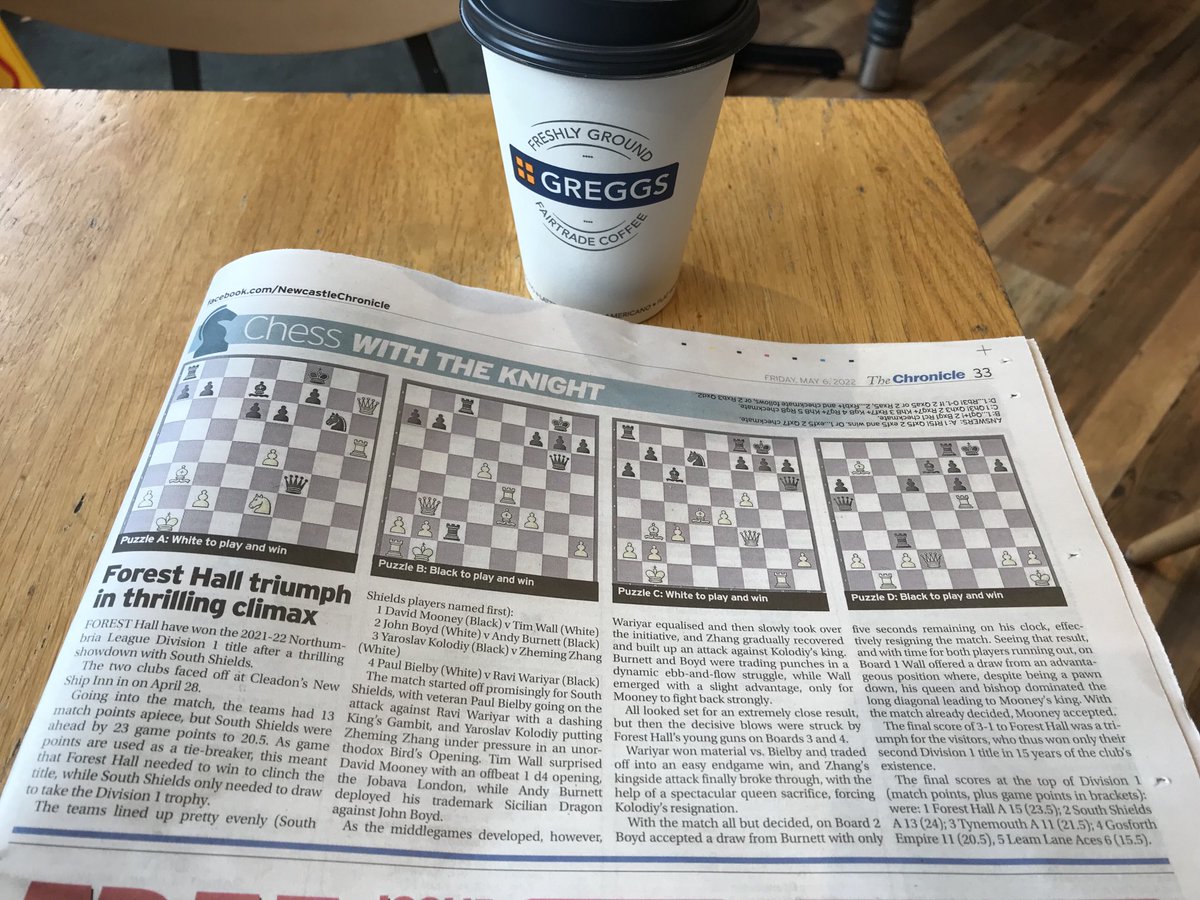 This week’s ‘CHESS WITH THE KNIGHT’ article in The Chronicle features Forest Hall’s exciting victory in the Northumbria League.

Forest Hall have won the 2021-22 Northumbria League Division 1 title after a thrilling showdown with South Shields in the final round of the competition.

The two clubs faced off at South Shields’ venue, the New Ship Inn in Cleadon, on Thursday April 28.

Going into the match, the two teams were tied on 13 match points each, but South Shields were ahead by 23 game points to 20.5. As game points are used as a tie-breaker, this meant that Forest Hall needed to win to clinch the title, while South Shields only needed to draw to take the Division 1 trophy.

The match started off promisingly for South Shields, with veteran Paul Bielby going on the attack against Ravi Wariyar with a dashing King’s Gambit, and Yaroslav Kolodiy putting Zheming Zhang under pressure in an unorthodox Bird’s Opening. Tim Wall surprised David Mooney with an offbeat 1 d4 opening, the Jobava London, while Andy Burnett deployed his trademark Sicilian Dragon against John Boyd.

As the middlegames developed, however, Wariyar equalised and then slowly took over the initiative, and Zhang gradually recovered and built up an attack against Kolodiy’s king. Burnett and Boyd were trading punches in a dynamic ebb-and-flow struggle, while Wall emerged with a slight advantage, only for Mooney to fight back strongly, creating an extra outside passed pawn.

All looked set for an extremely close result, but then the decisive blows were struck by Forest Hall’s young guns on Boards 3 and 4. Wariyar won material vs. Bielby and traded off into an easy endgame win, and Zhang’s kingside attack finally broke through, with the help of a spectacular queen sacrifice, forcing Kolodiy’s resignation.

With the match all but decided, on Board 2 Boyd accepted a draw from Burnett with only 5 seconds remaining on his clock, effectively resigning the match.

Seeing that result, and with time for both players running out, on Board 1 Wall offered a draw from an advantageous position where, despite being a pawn down, his queen and bishop dominated the long diagonal leading to Mooney’s king. With the match already decided, Mooney accepted.

The final score of 3-1 to Forest Hall was a triumph for the visitors, who thus won only their second Division 1 title in 15 years of the club’s existence.

The final Division 1 scores were (match points, plus game points in brackets):

Leam Lane Aces and Morpeth now go into the Division 1 & 2 playoffs, playing against the top two Div. 2 teams, Jesmond and Tynemouth B.