Here are some of the key moments in Ethan Tatters’ latest win in the Forest Hall Club Championship.

The exciting game of fluctuating fortunes was played with 45 minutes (plus 15 seconds increment) on the clock.

The opening was a Sicilian Defense: Smith-Morra Accepted, Paulsen Formation.

After 12 moves this was the position. 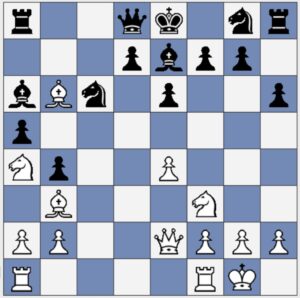 Black has just played 12…Ba6 and white has a choice of 3 good alternatives: Qxa6, Bc4 and Qe3.

The game is level at this point and Ethan played Qe3

After the game Ethan said he was calculating Bc4, which is the engine recommendation. However, he played Qe3 which he thought was better in practice as he didn’t want to trade pieces. 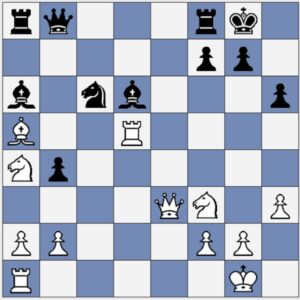 White’s has just taken a pawn with Bxa5 and black has a chance to capitalise on the position of the bishop on a5 with Bc4. Stockfish gives the following line 20…Bc4 21.Rxd6 Qxd6 22.Bb6 Rxa4 23.Bc5 Qe6 24. Bxf8 Qxe3 with a significant advantage to black.

A rook and pawn ending was reached with white a pawn ahead. 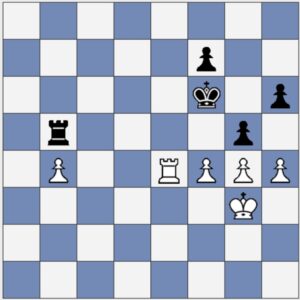 … white has just played 46.f4? which gives black good drawing chances if the h pawns are swapped off with 46… gxh4+ followed by 47.Kxh4 Kg6